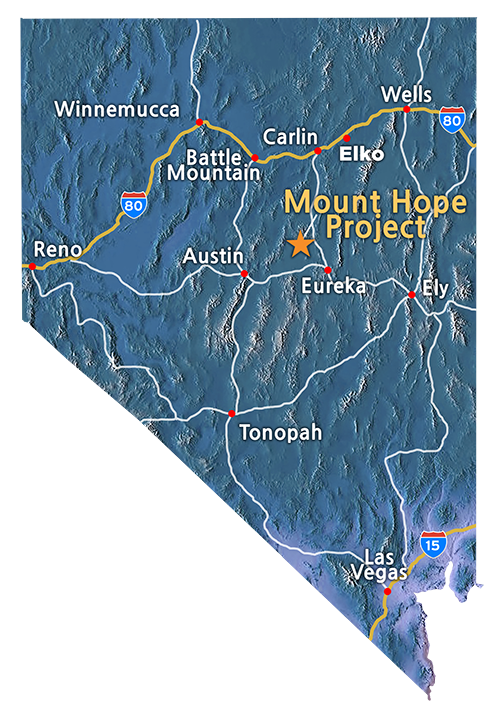 The Mt. Hope Project is one of the largest and highest grade primary molybdenum deposits in the world. The project is owned and operated by Eureka Moly, LLC (EMLLC), of which New Moly has an 80% interest through a subsidiary Nevada Moly, and POS-Minerals Corporation, a subsidiary of the South Korean steel company POSCO, has a 20% interest.

The Mt. Hope Project’s plan of operations covers approximately 36 square miles. Year-round access to the project site is from Route 278. The Mt. Hope Project is in the vicinity of other operating hard rock mines with a large, experienced mining workforce.

From as early as 1886, and sporadically until circa 1975, the Mt. Hope area produced zinc as well as by-product lead, copper, silver and cadmium from small underground mines. In 2005, a predecessor company of New Moly acquired all of the leasehold rights to the property. In 2008, the Company and POSCO formed the 80%-20% joint venture for the development of the Mt. Hope Project.

The Mt. Hope deposit, measuring 1,500 feet in diameter, is centered in an elevated area of igneous rock. The economic mineral is molybdenite. The Mt. Hope molybdenum porphyry deposit is similar to the Climax deposit in Colorado.

The Company is advancing exploration of a potential high-grade, copper-silver exploration target along with a significant zinc mineralized area at the Mt. Hope Project site, southeast of the Mt. Hope’s molybdenum deposit in central Nevada.

When operational, the Mt. Hope mine plan entails open pit mining using one hydraulic and two electric shovels, and a fleet of Caterpillar 240-ton mining trucks.

Engineering remains approximately 65% complete at the Mt. Hope Project. Currently, there is no ongoing engineering and equipment procurement effort. EMLLC has ordered or purchased most of the long-lead milling equipment, haul trucks and mine production drills, and has maintained an ongoing letter of intent preserving deposits paid and indexed pricing for the purchase of two electric shovels.

EMLLC continues to work with the respective vendors to extend these agreements until the Company obtains financing for the construction of the Mt. Hope Project.