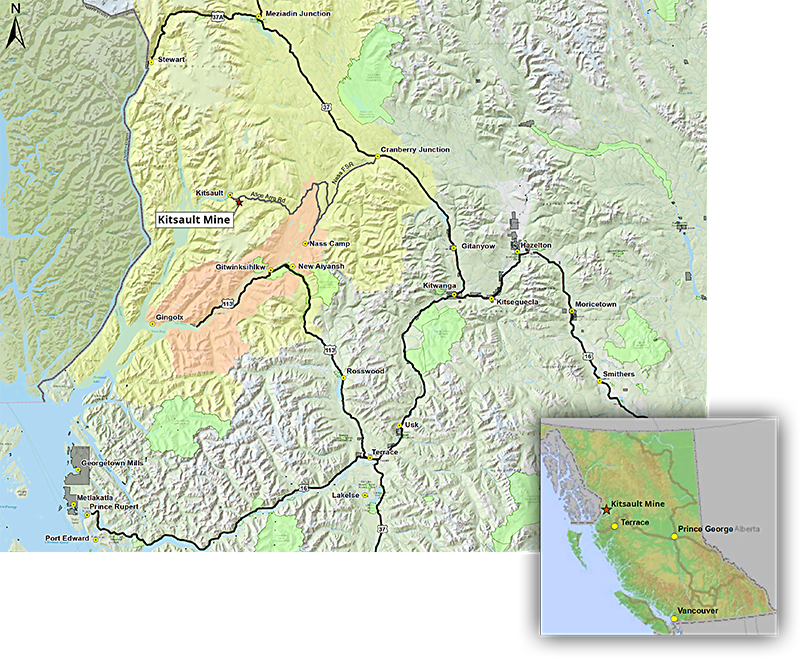 The Kitsault Mine Project is one of the largest and highest-grade primary molybdenum deposits in the world. The project is owned by Avanti Kitsault Mine Ltd. (AKML), in which New Moly has an 100% interest.

The Kitsault Mine is located in northwestern British Columbia within the Regional District of Kitimat-Stikine, approximately 140km northeast of Prince Rupert and south of the head of Alice Arm, an inlet of the Pacific Ocean.

Kitsault Mine is a brownfield site with considerable past mining activity and basic infrastructure in place. From as early as 1968, and intermittently until 1982, the mine produced approximately 30 million pounds of molybdenum from open-pit mining. Rehabilitation of the 1981 – 1982 mining program was started under an approved reclamation program in the mid-1990s and was completed in 2006.

AKML completed the purchase of an undivided, 100 percent (%) direct interest in the Kitsault Mine (molybdenum mine and surrounding mineral tenures) from Aluminerie in October 2008. Under AKML, permits have been well advanced with key provincial and federal permits in place for development of an estimated mine life of 15 years with an ore production rate of 16.2 Mt/year. Kitsault Mine development includes construction of a new access road and process plant, upgrade of the existing powerline, expansion of the existing open pit, construction of a low-grade ore stockpile, waste rock management facility, and a tailings management facility with associated water management ponds.

On May 30, 2014, AKML entered into a Cooperation and Benefits Agreement (CBA) and an Environmental Agreement with the Nisga’a Nation. This agreement recognizes and formalizes the working relationships between the Nisga’a community and AKML, and is a vital step in the development of Kitsault Mine.